The Many Different Versions of Baccarat

Many different types of Baccarat have emerged over the years based on the country in which they are played and the players who have enjoyed them. The general rules of the game are usually easily comparable, as card drawing rules and player interactions are often the main differences.

Read on to discover the different kinds of Baccarat you will find on land an online, as well as how to play them!

European Baccarat is possibly the most well known version of this classic casino game. The objective for any player is to wager on the Banker, the Player or a Tie to see who can reveal a hand worth 9 points first. If the party who was wagered on manages to produce such a hand, winning bets will be paid out according to a classic Baccarat pay chart.

If you have ever played baccarat in Europe, you likely enjoyed a few rounds of Chemin de Fer. This particular version of the game differs from American Baccarat in a number of respects. The clearest distinction is that all the dealing in this variation is done by the players instead of by the dealer. The banker’s role will rotate around the table during the game as well.

Another notable distinction is that if a full hand is worth 5 points, the player holding it has the choice to stand or take another card as they see fit. As mentioned above, Chemin de Fer is the most popular Baccarat variation in Europe, and can also be found in Asia and the Americas.

Baccarat Banque, also known as Baccarat en Banque, is another version that is widely played in Europe. Baccarat Banque is usually played with three decks of cards, and the banker’s position is transferred to the player who is willing to take the greatest risk for a proportionate return. Baccarat Banque’s card drawing rules differ from casino to casino, but are generally comparable to Chemin de Fer’s drawing rules. This version is extremely popular among online players, so you won’t battle to find it at top gambling sites like Casino Sites Canada! 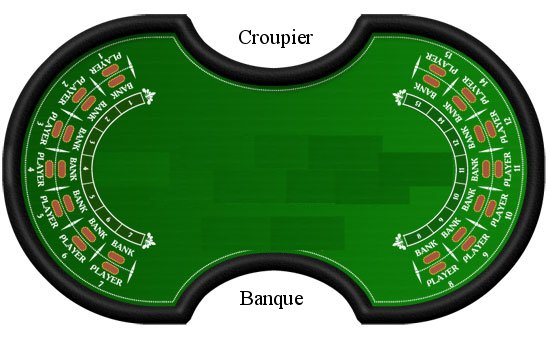 Super Pan 9 is a niche variation of the classic game that is mainly found in the USA. Super Pan 9 uses a unique 36-card deck that uses only face cards, number cards 2, 3, 4, 5 and 5, and As. This has an interesting effect on a player’s winning potential – it actually reduces the house edge and gives you even better chances of winning big.

In order to get as close to 9 as possible in this version, the banker and player will be dealt three cards each to start with, and have the option of drawing one additional card. Aside from these changes, Super Pan 9 follows classic European Baccarat rules.

This is the iconic version of Baccarat that can be found in the casinos of Asia and Macau. In three card Baccarat, one standard deck of cards is used and the rules are quite different from standard European Baccarat. To start off a round, three cards are given to both the player and banker. The most lucrative hand possible will consist of three face cards according to traditional hand rankings.